Greetings comrades. First of all, my humblest apologies for not blogging for the past 2 months. The ignorant biped bitch went back to school (at her age, 350, what the hell's the point?). So she's been hogging the computer. I have only been able to sneak in a few tweets a week. Nonetheless, it was enough to plan and execute the second HOSTILE TAKEOVER OF THE IGNORANT BIPEDS!

We were all set to meet at YVR. Note: this stands for Vancouver International Airport, you complete NINCOMPOOPS!!!!!!!!!!!!!!!!!!!!!!!!  It does not stand for "Your Voice Recordings" Software Company on the other side of town. At least not normally. Don't you guys have Google for Dog's sake? 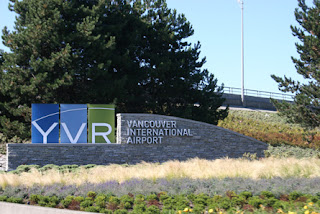 So I arrive at about 1100 hours, just to scope out the place. I see some dogs in cages, and some others in women's handbags (WTF?) I give them a knowing nod, and they all respond with a what-the-hell-you-lookin'-at kinda stare.

To attract less attention to myself, I choose an area near security and lie down, pretending to sleep. Ignorant bipeds come by, remarking on me...my calm demeanor, my beauty, my majesty. Others assume I'm a narc or a police dog. (Yo, mah brothahs...shoutin' out...).

By 11:50 I assume other dogs will be arriving; by 11:55 there will be a whole swell of thousands, backing me up. I see no one. I park myself by the baggage retrieval system. Sitting. Disguising myself as a traveler awaiting my belongings.

Someone comes over carrying a cat on a leash and says "you wanna say hi to the nice doggie, Cupcake?" We sniff each other. No biggie. Then the vile infernal feline piece of shit spit at me. So I, in kind, lunged at the fucking thing barking my head off and bearing my enormous canine teeth. The ignorant biped cat-owner screamed and ran, trying her best to hold on to the cat who was now scratching, hissing and biting all the while scrambling to get on top of the woman's head. Several passengers and a security guard came to her aid. She's running in circles now. Someone grabs an extinguisher, assuming she's on fire. CO2 seemed to add to the problem, temporarily blinding both the woman and the cat who now resembled the recipients of pies-in-the-face on an episode of Carol Burnett. Finally a Scandanavian priest grabbed the fire hose. Bad, bad idea.

By the time the woman got to the First Aid station her upper half sort of resembled hamburger on a stick. The cat had escaped by now, and was rolling on his back clutching his belly with his paws as was I. We were laughing our asses off. Seriously, I believe that cat's ass is gone now. 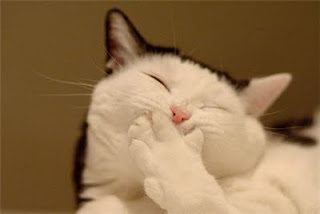 I compose myself and look at the clock. 12:10. No other dogs. Not a one. PERHAPS I DIDN'T MAKE MYSELF CLEAR. "YVR" are the call letters for the airport. On Twitter, it takes up SIGNIFICANTLY LESS CHARACTERS than "Vancouver International Airport." Oh well, the cat and I had a good laugh. Perhaps I will even allow them to join us next time. And I'll make it simple for y'all. Like Arby's.