Top 10 reasons a birdfeeder is a stupid idea

Finally, after a long FREEZING COLD winter the yuppie bitch biped is packing up our stuff and getting us the hell outa Dodge. Well, Edmonton. If you're not Canadian, Edmonton is known as the armpit of the west. Okay so I made that up cuz it STINKS here. Not in the olfactory sense of the word; in the it-stinks-to-be-here sense of the word. The only good thing about it is the snow. Fun stuff, I gotta admit. Not so much for the yuppie bitch biped bein' as it snows from October til now. One night it was like 50 degrees below zero. Celcius, Farenheit, same thing at that temperature.

Wednesday I shall be incarcerated and taken once again on prisoner transport to Vancouver. We'll probably fly again in the belly of the big tin bird. When we get there the ignorant biped bitch will pick us up. Once again, I plan to bust out of the cage at the airport and jump all over her. If possible I will jump on top of her head. I do this NOT because I am happy and excited to see her after four months. I am never happy or excited to see an ignorant biped. Death to the ignorant bipeds. It is merely a matter of....um.....getting the proper exercise after being cooped up.

The first thing I will do upon reaching my old den is to growl at Dumbass until she pisses herself. This is hilarious and works every time! Last week she just sniffed my presence on the male yuppie biped's pants and pissed herself. hahahahahha! Just wait til I get there. My second order of business will be to eat that Satanic cat. After a satisfying belch I will begin to plot our next hostile biped takeover. Stay tuned.

Since the addition of MOUSIFER SATAN to our den, my life has been a living hell. The ignorant biped bitch is on the computer 24/7 supposedly studying for some stupid "course." Not sure if it's an appetizer or entree course, but how much do ignorant bipeds need to study it? Just eat the damn thing and ask questions later.  But I digress. The ignorant bipeds are away this morning worshiping their gods so I have a rare two hours at the keyboard.


While I don't understand the biped gods I do understand their concept of Satan. The Evil One who comes in many forms, luring creatures to do despicable things so that they will be rewarded in the afterlife by being made kings of the underworld. What's that you're saying? .... umhmmm......so you're saying if Satan is fully evil then a system of rewards does not follow reasonably. Okay, so....well....wow, that does sound pretty evil.....

Anyhow....this cat is fucking SATAN and needs to be nookin' obliterated with a lightning bolt by Dog Almighty. Here are the top ten reasons why: 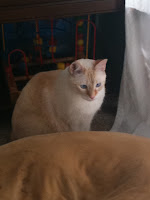 8. He has evil yellow eyes, with black slits in them 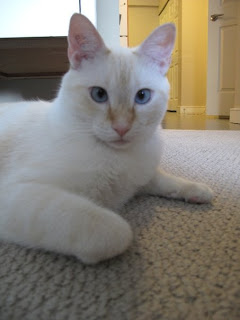 Okay, so they look blue in this picture, but....

7. He's CROSS-EYED then. YA! And so is Satan. Yes, he is, don't argue with me.
6. He has a TAIL. (Don't say it)
5. From time to time, he carries around a big FORK. No shit. What?....no, I don't have a picture of that. Well, just because. I....I didn't have my camera with me that day.
4. He refuses to drink out of the toilet (how creepy and disgusting is that?)
3. He has been captured on camera luring the ignorant biped bitch, sucking her in with his evil ways: 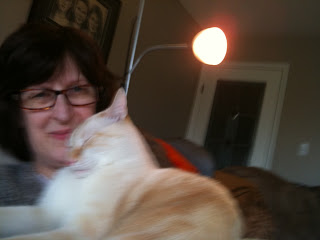 2. He keeps a piece of the desert in his own den....in the form of a box of sand....just in case that Jesus guy comes back and needs to be tempted again to take over the world.

1. But the # 1 reason this cat is Satan:  He changes his FORM. Just the other day when the ignorant bipeds weren't around I caught him morphing into this:

Those from the United States of Ignorant Bipeds would be more likely to relate to this form:

(the cat is the one at the top of the picture holding the sign: note the resemblance)


To keep the Evil One from entering your den, join with me in a hymn to Dog Almighty entitled:

Guide Me O Thou German Shepherd