Beware of cats who eat beans!

Comrades, I must issue a warning today to you all. Of course, as you know, I have a love-hate relationship with cats in the first place. As a general rule I hate fucking cats. However, even the great Mikey has a weakness of the flesh and I speak of my illicit forbidden-love bi-species relationship with my beloved ChiliPepper. 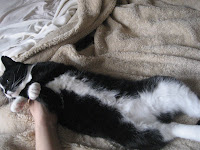 Your basic black cat with a white stripe that appears to divide in two at the base. No problem, right? Right. This cat has a healthy diet.

Sometimes the white stripe on a black cat makes him appear evil as in the example below. This cat poses no threat to the dog. He probably eats a diet of fish-related mush which digests no problem into his intestinal tract. 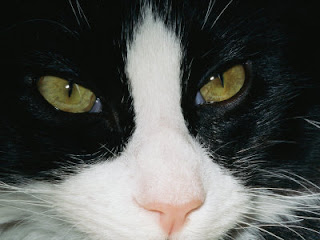 If you're really looking for evil in a black-and-white cat this one is the feline reincarnation of the most evil ignorant biped to ever live. This cat does not hiss, scratch your eyes out or fight. He does not even fart in your general direction. He just meows orders to a squad of other cats who lock up all the dogs in ghettos and force them into slavery. He probably eats mice and rats live. No biggie. His day will come. 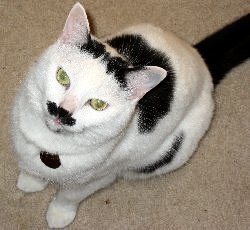 Some black-and-white cats clearly eat too much. Really you ignorant bipeds? Really? WTF. 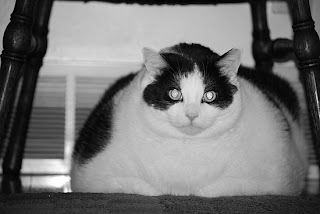 Some black-and-white cats are fluffy and, though incarcerated, are fed expensive biped-produced delicacies like "chicken and giblets with gravy" or "salmon and shrimp feast." Although incarcerated they get lots of attention and win ribbons for their ignorant biped oppressors to show to their friends. 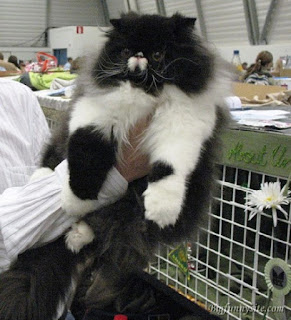 Some black-and-white cats are small school children in disguise. Beware of these. They pull your ears and slobber on you. Then when you growl at them their mothers scream obscenities at your biped oppressor as though you were not supposed to be an actual dog at all. 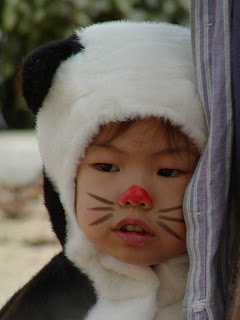 Still other black-and-white cats are just downright cute and if I weren't already spoken for I might consider an illicit bi-species relationship with this one: 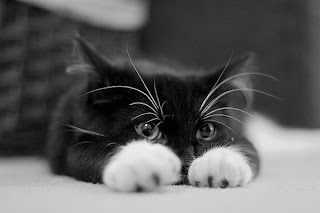 Based on the perfection of her eyebrows I'd say this cat has a healthy diet of catfood #47 for "Black-and-white alley cats with sensitive stomachs who live indoors, get moderate exercise, have shiny coats and hork up furballs."

Never mind any of these, comrades! But if you come across a black-and-white cat whose diet is mostly beans and looks like this, WATCH OUT! 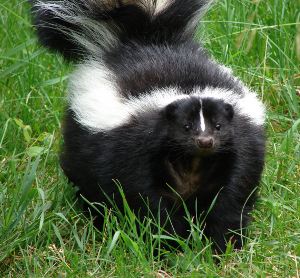 The only other thing this cat could have eaten is biped-made chili. I chased it the other night and just as I caught up to it he stopped in his tracks and let one rip in my general direction. Geezes fucking Key-rist! I was like "WHAT the hell did you EAT?" and bald lardass biped was yelling for me to come back - which was no problem. Dumbass managed to fluke her way out of getting farted on by doing what she always does: blindly following the ignorant bipeds' "leave it!" command.

So I ran right into the house in the middle of the living room and the ignorant biped bitch starts yelling "Charlie! Get that dog out of here! He's been sprayed by a skunk!" (This must be some biped euphemism for "smells of alley-cat monstor farts.") They hustled me outside but not before leaving that fart odor all over their furniture and clothes. I was incarcerated in my crate and then punished by being bathed in tomato juice. As if I needed a punishment to assure I never chase one of those fuckers again.

On the upside, I got a trip to the doggie beauty parlour the next day since the tomato juice got stuck all in my fur and pretty much just trapped the odor in there. They bathed me in peroxide-baking-soda-dish soap and then a shampoo, conditioner, massage and mani-pedi. When I take over the world I will keep those doggie-spa bipeds around for our pleasure. But let me tell ya. Those bean-eating cats have gotta go.