Back story:
It was forbidden love. After years of hating cats, chasing cats and having cats for dinner with tennis-racket gravy, MikeyTheBrat fell in love. She was just a little ball of fluff, 8 weeks old when he met her. Born of a noble line of domestic long-haired alley cat tabbies and rescued from the SPCA, they named her ChiliPepper for her fiery personality. Sure, it was a May-December thing but animals are unaware of the passing of time anyway.
Mikey was accustomed to every other animal in the house submitting, cowering, running, hiding, hissing or scratching/biting/fighting. (Resistance was futile.) But this little creature was different. When Mikey growled at her, she rubbed up against his mouth. When he barked she gently batted his nose. He fell, and fell hard. Inseparable from that day, the two were to be wed on Sunday, April 1st, 2012 on the Kardashians' front lawn just hours before Mikey's DOGFORCE was set to take over the world from the ignorant bipeds.

It was supposed to be the happiest day of my life. Instead, I am humiliated and defeated. Just to be clear, when I'm humiliated and defeated I normally tear into some small school children or the neighborhood squirrels. I'm not the slink-away-under-a-sink kind of personality. But alas, my hopes were high so I had farther to fall. (Side note: now that I've fallen this far and survived I'm gonna fuckin' climb one of those trees some day.)

The stage was set. About 7,000 of my 8,000 of Twitter followers were gathered on the Kardashians' front lawn. (Don't think I don't know who you other thousand are, assholes. $3 a plate for Alpo doesn't come cheap.) Anyway, our two species, cats on the right, dogs on the left were assembling peacefully. There was a small disruption when the Pitbulls decided to take on the Persians but my groomsmen broke it up and only sixty of them were taken to hospital where they are resting comfortably. The Persians returned to their seats, where many suspected they were hiding nuclear weapons.

This wedding day was to be symbolic of the ushering in of a new age. An age where different species could coexist happily together. Once we defeated the ignorant bipeds and took over the world, Chili and I were to reign in power as King and Queen. But alas! Instead, I was royally dog-fucked.

We waited for half an hour. Brides are supposed to be fashionably late but that was ridiculous. My best dog, Squirt GG the bulldog, finally took me aside. "Dat cat's not showin Mikey" he says.

So I look toward the aisle to see only the cat of honour, MOUSIFER SATAN, prancing down with a cheshire grin on his face. Then he yells "April Fools dumb dog!" and kind of falls on his back with his arms around his waist and starts busting a guitar string laughing. Then this image appeared on the jumbo screen: 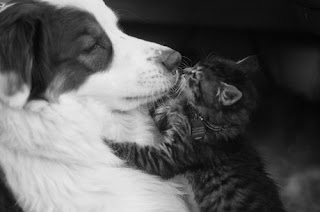 Mother-fucker!!!!!!!! I'd been punked. (And by the way, if I ever find that Bearnaise Mountain Fuck I'm gonna roast him and serve him with Bernese sauce.)

Suddenly, pandemonium broke out. 200-300 of my closest pals held me back, but the other 3500 or so just lit into the cats who had all, by this time, fallen off their chairs and were clutching their sides and slapping their knees with their front paws. Broo-ha-ha ensued and all the barking and yowling brought the Kardashians running from their house. Within seconds, the females had each broken a nail and thus were forced to race back inside. The young male one, clearly unawares of what the fucking hell was going on, began dancing a cha-cha. He was soon overtaken by about sixty cats, all clamoring up his pantlegs to the safety of the top of his head. Suddenly he grabbed his head, and the five cats, and started turning pirouettes and screaming something that sounded like "QUICK! QUICK!" then "SLOW!" then "QUICK! QUICK!"  Clearly delirious. I believe he was eventually eaten, but I'm not sure by whom or what.

SPCA sirens sent the crowd bolting off to nearby towns and villages. Wait, I'm getting a message here....sorry, what?....oh....oh I see....yes, yes. I'm being told those are not towns and villages, just neighbour's houses. Several thousand animals remained, wounded and barely alive but thankfully there were no fatalities. And I've since been told that all of these dogs are recovering in homes and hospitals.

So there you have it. That's the story, folks. You see? Even the smartest of all world rulers can be fooled by these demon-like creatures known a feelines. Finally I know what this word means. Previously I had assumed that feelines were just a long thin crowd of ignorant bipeds waiting for their turn at the motor-vehicle branch. But no! Instead, they are a species of conniving, conspiring, cunning, cheap, lying, no good, rotten, far flushing, snake licking, dirt eating, inbred, overstuffed, ignorant, blood sucking, dog kissing, brainless, dickless, hopeless, heartless, fat assed, bug eyed, stiff legged, spotty lipped, worm headed, sacks of monkey shit.(1)

BUT NEVER AGAIN! From now on ALL cats are the enemy. Ya, you heard me. All you thousands of cats following me on Twitter PISSOFF. We have now declared war. You shall be rounded up, stripped of your possessions, and herded into ghettos to live out your miserable existence. Then we will escort you....you and your evil-cutesy-purry-fluffy little kittens, one by one, to the ovens.